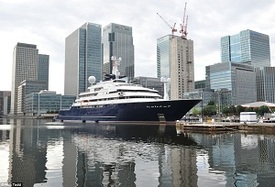 London’s 2012 Olympic Games look like being the culmination of a series of global events in the capital. It all kicked off on the 29th of April 2011 with the Royal wedding, watched by an estimated 3 billion people worldwide (source New York Times). This summer saw the Royal Jubilee assemble the largest armada the Thames has ever seen.
The Olympics looks to continue the nautical theme on the Thames with berthing arrangements being made to welcome some of the world’s largest superyachts. Seven weeks after a flotilla of more than 1,000 small craft celebrated Queen Elizabeth II’s Diamond Jubilee, the city is host to a glitzier collection of boats docked to celebrate the games that run from July 27 to Aug. 12. They range from superyachts and charter yachts to cruise ships docked near the Excel Center, an Olympic venue in East London, and Britain’s largest warship, HMS Ocean, anchored near Greenwich M/Y Octopus, the yacht owned by Microsoft co-founder Paul Allen, is moored at West India Dock, where the towers housing Barclays and HSBC reflect in its gleaming blue hull. Next to it is Westfield Group Chairman Frank Lowy’s white ship M/Y Ilona, with a red carpet leading to the gangplank and an Australian flag billowing from the stern. A charter yacht is a great way to have a base at the centre of the Olympic action and offers the perfect venue for hosting clients and friends in a luxurious environment.
The First Superyacht?

Another fine ship present for the games is the Belem, a magnificent three masted barque, one of the last sail-powered trading vessels of the French merchant marine, built in 1896 in France. Named after the Brazilian city she visited on her maiden voyage, the Belem crossed the Atlantic as a trading vessel until the beginning of World War I. Then, in the first of many changes of fortune, she was bought by the Duke of Westminster to be used as a pleasure yacht, one of the first superyachts in a way. The Duke transformed her from a trading vessel into a luxury yacht, adding two large engines as he went along, and navigated in her for a few years after the war, visiting the fashionable resorts of Biarritz, Nice and Cannes during the summer months – plus ca change! In 1921 he sold her to the Irish beer baron Arthur Ernest Guinness, who renamed her Fantome II and made more changes, adding amongst other things a bar and a grand piano. Guinness used her more like a modern expedition yacht, navigating on her year round. In 1923 he circumnavigated the globe with his three daughters on board, going through the Suez and Panama canals and as far north as the Arctic Circle. When Guinness died in 1949, she was bought by a Venetian Count for his foundation and used as a sail training boat, navigating mainly in the Adriatic. In 1965 she was deemed too old for this and moored in Venice and used as a boarding school. Various owners followed until a French association acquired her, and she is now used as a sail training vessel in France. Charter yacht is her current function when she is not being used as a sail training vessel, and she can be hired for functions and the like at venues such as the Olympics.
back to list
Share this page