Sold by Fraser in 2022, BOAT International rediscovers 10 cool facts about CARINTHIA VII, one of Tim Heywood's most legendary creations.

The full article can also be viewed at BOAT International.

When Tim Heywood's preliminary sketches of 114.5 metre Pelorus were shown to a prospective Lürssen client, the client was taken with the yacht's bold profile and distinctive lines. In 2002, those sketches sprang to life as 97.2 metre Carinthia VII. As Tim Heywood prepares to speak at the Superyacht Design Festival 2023, BOAT rediscovers 10 of the coolest facts about one of his most legendary creations as she goes in for a refit at Blohm + Voss.

1. She was built for a serial yacht owner.
Carinthia VII follows is the last in a long line of yachts named Carinthia, commissioned for department store magnate Helmut Horten and his wife Heidi. The first four yachts in the series were smaller, but the fifth was a 67.85 metre, also built by Lürssen, which was tragically lost at sea during her maiden voyage from Greece. The sixth Carinthia VI had better fortunes — the 70.7 metre was delivered in 1973 and used by Horten until his death, following which she was sold and renamed The One. Carinthia VII is the only yacht in the Carinthia line to be commissioned by Heidi alone.

2. The hull color inspired the name "Carinthia Blue".
The unique blue hull colour was later marketed as "Carinthia Blue" by manufacturers Awlgrip. The paint colour was a key component of Hewyood's exterior vision, helping to create a powerful silhouette that has the appearance of being unbroken by the black windows.

3. Her interiors are by Ellerhorst and Kreuter.
The yacht's interior styling has been seldom seen until now. Austrian studio Ellerhorst and Kreuter helmed the design, and has used a mix of different palettes and themes across her spaces. For example, the dining area is tropical and almost flamboyant, whereas the main saloon is pared-back, with coffee-and-cream tones offset by mint green. The design team had a volume of 3,643 gross tonnes spread over six decks, plus a beam of 16.6 metres to work with. Accommodation is for 14 guests in eight cabins.

4. She marked the fourth-largest yacht sale of 2022.
Carinthia VII was sold in September 2022, with the sale announced just days before she was due to make her appearance at the Monaco Yacht Show. Antoine Larricq and Stuart Larsen at Fraser represented the seller, with Ralph de Joode from RYacht Monaco introducing the buyer. She was listed for sale in April and had a last known asking price of €95,000,000. Now under new ownership the yacht has been spotted at Blohm + Voss for refit works.

5. She was the largest yacht designed by Tim Heywood at the time of her delivery.
Tim Heywood's initial designs for Carinthia VII were unique; the yacht had a soaring forebody and a sheerline that sweeps downwards towards the stern. However, those characteristics were initially designed for Pelorus. It was only because Carinthia VII was several metres shorter that she was built first, with Pelorus hitting the water the next year with a few key changes.

6. She has an enormous onboard spa.
The yacht's spa zone has been conceived as a fully-equipped wellness area on the water, with an unfolding sea terrace that allows direct access from the water from the gym area. As well as a spacious sauna, the yacht also has a steam-style shower room and a mosaic-clad plunge pool.

7. Her windows are bulletproof.
One of the security features of this yacht is her bulletproof windows. As well as being practical, the windows also let in plenty of light and contribute to an airy feeling throughout the yacht.

8. Her helipad can accommodate a 5-tonne helicopter.
The yacht has a number of high-calibre amenities including a touch-and-go helipad on the bow. Other highlights include a sundeck Jacuzzi and numerous dedicated spaces to lounge across her decks.

10. She is the 66th largest yacht in the world in terms of length.
In terms of LOA, Carinthia VII ranks somewhere around 66th place (depending on whether you factor in superyacht vessels). At the time of her delivery, she was around the 20th largest. 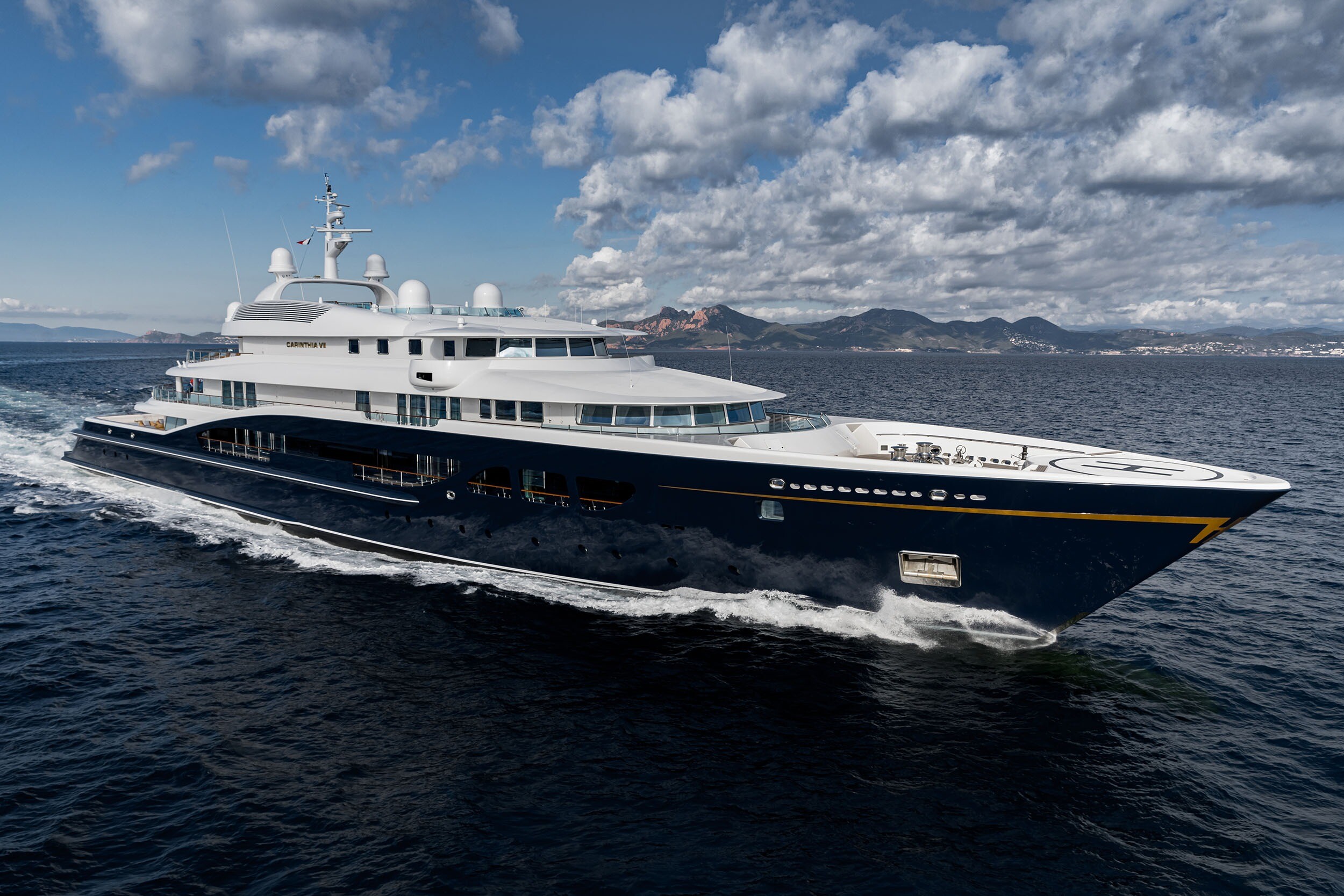