A Hero for the Seas

Captivating the world with the launch of the OceanX initiative, Mark Dalio and his father are on a mission to explore the world’s oceans aboard their remarkable new vessel, OCEANXPLORER. 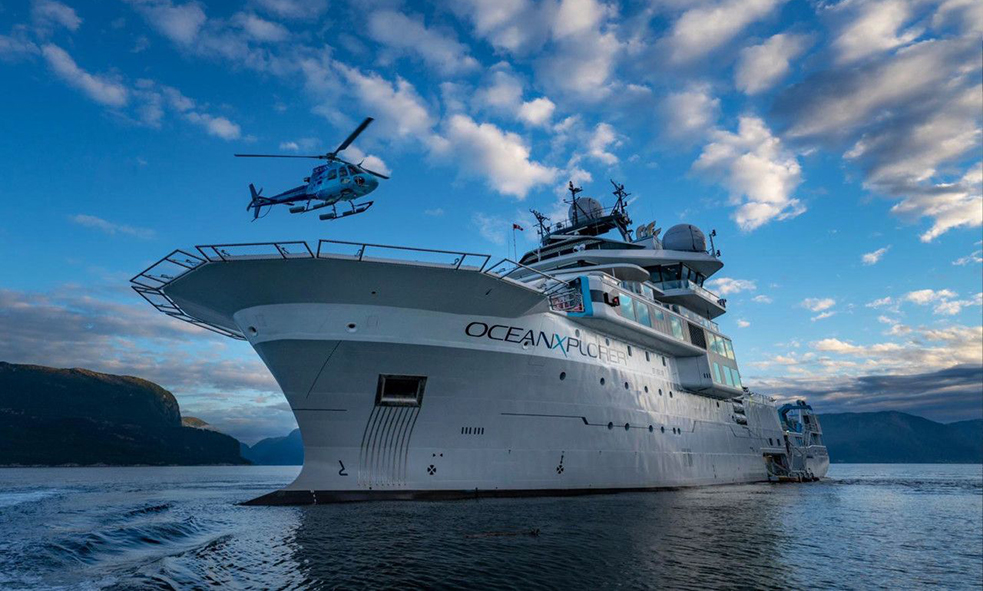 Today, marks the official launch of OCEANXPLORER after an extensive refit, project managed by Fraser. The one-of-a-kind scientific research, media production and exploration vessel marks a new era in advancing the scientific research of the Earth's most previous and least understood resource.

It will make it possible for humans to explore and document parts of the ocean like never before - and even share those discoveries in real time with the world.

Here in a previous interview for the Fraser magazine, Mark and Ray Dalio talk about their exciting plans for OceanXplorer. Mark speaks with the conviction of one who has found a singular purpose in life. Son of the billionaire hedge fund manager and philanthropist Ray Dalio, Mark studied filmmaking in New York then worked for National Geographic before launching OceanX Media, the media arm of OceanX, dedicated to turning the stories of marine science into some of the best film and television the world has ever seen.

Filming the Giant Squid changed everything. When the world saw the huge, elusive creature for the first time in 2013, it was in video footage shot from the Dalios’ Triton sub, launched from ALUCIA, their 55m private research vessel.

ALUCIA had succeeded as a supremely powerful tool for executing research of the most spectacular kind. Mark saw the opportunity for an ambitious media mission.

“Jacques Cousteau first gave the public a chance to be fascinated and amazed by the oceans,” Mark says, paying homage to the pioneer of marine-life documentaries. “But now we need to re-engage.” He points to the BBC’s worldwide hit Blue Planet II – parts of which Alucia Productions, the progenitor of OceanX Media, helped produce – as the kind of compelling storytelling that can have a real impact on the world.

A shortlist of their already impressive accomplishments includes: finding brine pools at the bottom of the Gulf of Mexico, illuminating the hunting behaviour of Humboldt Squid, completing the first 1,000m dive in Antarctica, filming that Giant Squid off Japan, along with their Galapagos, Papua New Guinea and Great Barrier Reef adventures with Sir David Attenborough, Sylvia Earle and dozens of scientific researchers.

“There’s momentum now; when we give ourselves a chance to appreciate life and tell the story of the oceans, it gives people the opportunity to enact change in their own lives and to demand change from the world around us,” he says. “The awareness about the impact of plastics on life in the oceans has only just been raised, but it’s come from people seeing and understanding its impact. And now Starbucks and many other companies have banned plastic straws. It makes a difference.”

From the start, the Dalios’ desire to own and operate big boats has been about putting resources behind science. Much of Blue Planet II and indeed the Discovery Channel special that revealed the Giant Squid would not have been possible without ALUCIA, but there is a new vessel in build, even bigger and better equipped than the first – OCEANXPLORER.

“With OCEANXPLORER, we really want to take our capabilities to the next level,” Mark says. “ALUCIA served us wonderfully over the years, but we struggled to get enough people and kit aboard. With OCEANXPLORER, at 85m and 4,398GT, we can take 12-17 additional scientific and media crew.”

OCEANXPLORER will have wet labs that will allow researchers to pull up creatures from the deep, take DNA samples and return them back to their habitat. The crew will be able to run ROVs and the sub at the same time, which wasn’t possible with the A-Frame on ALUCIA. There’s the prominent bow-mounted helideck and hangar. The ship will have dry labs and media editing suites built with the advice of James Cameron and production designers. And with her distinct styling, she will be the USS Enterprise of the oceans.

“She’s going to be incredible, and a character herself in the stories we tell,” Mark says.

The vessel is currently under conversion into a Calypso-esque hero of the seas from her former life as an instrument of the oil and gas industry, a beautifully ironic turn that will add to her story, Mark points out.

“When she’s ready, we will head to new and exciting locations, but also ones that are well-known enough that we’re chasing interesting leads,” he says. “We want to pioneer exploration, but also keep up with discoveries.”

“With OCEANXPLORER and OceanX we’re now putting together our four-year plan,” Mark says. “We’ve partnered with Woods Hole Oceanographic Institute for both science and ship operations. Our media team is based in New York from where we bring in producers and the team for the expeditions. And for the science, we collect proposals from both institutions and individual researchers.” They will then decide what research to go after based on the storytelling opportunity: the impact and the audience.

“We’re inspired by NASA and SpaceX,” Mark says. “We want to work with amazing scientists who are also able to take us into their research and tell a fantastic story.” OceanX’s media output will expand from television series and museum exhibits, to big-screen film presentations, live-streaming and interactive gaming.

“Now, everything is integrated,” Mark says. “We have the platform, the tools, the research labs, the media rooms and the communication facilities all on board to be able to tell fundamental stories of discovery, at source. And that is very exciting.”

To find out more about OCEANXPLORER or our Project Management services please contact us.