‘Convention’ is not a word that interests Mr Farad Al Athel. He’s not kerbed by standard practice, or restrained by the unknown - his ambitions surpass the confines of what is typical in the yachting world, and instead, he is realising his goals one vessel at a time.

Born in Saudi Arabia, Mr Fahad Al Athel did not grow up by the sea. His passion for yachting was happened upon in 1999 when a good friend requested his assistance. “He asked me to visit Amels in Holland with him, and to discuss the potential of extending his yacht by three metres,” he says. “So, I went, it was a successful meeting, and from that time I became interested in boats.”

When that same friend decided to build a 65m luxury motor yacht, he once again placed his trust in Mr Fahad Al Athel. “He asked me to look for a good, reliable shipyard that could build a 65m at a competitive price,” he explains. “I didn’t want to go to Australia or Germany or Holland, so I decided to go to Turkey where I discovered a highly competent workforce at an achievable rate. So, I leased some land in Izmit near Istanbul, which I still have today, and decided to build the yacht myself.”

The result was the highly praised 65m M/Y Nourah of Riyad - designed by Donald Starkey, and at the time, the largest yacht ever to come out of Turkey. It was also the establishment of Mr Fahad Al Athel’s shipyard, Yachtley. “We completed the build in a good time - it only took four years to build both Nourah of Riyad and the shipyard,” he explains. “We built them together, and I then became very excited about what we could achieve.”

More than happy with the finished product, Nourah of Riyad’s owner went on to request a refit a few years later, also undertaken by Yachtley, and one that would see her extended to 70m, as well as equipped with a new swimming platform, beach club, new saloon on the sun deck and several other cosmetic changes. It was during her original build, however, that Mr Fahad Al Athel made some crucial decisions regarding the future of Yachtley and its workforce.

“I decided to hire Lloyds to certify the shipyard, and to certify M/Y Elements - the yacht that I planned to build for another client,” he explains. “I also decided to go for Lloyds and SOLAS certification for Elements, which cost me more, but I wanted the experience and training for my employees. We now have a really high calibre workforce producing a fantastic quality of work.”

At an impressive 80m, Elements is an inspiring yacht, thanks in no small part to her notable SOLAS classification, and her naval architecture undertaken by Alfa Marine in Athens. She comfortably accommodates up to 24 guests within her expansive interior, as well as 19 crew, comprising a master suite, two VIP staterooms, four double staterooms, four twin staterooms and one smaller twin stateroom. She features a classically-styled displacement steel hull (tested at Marin Institute in Holland) and an aluminium superstructure, with teak decks, and is fitted with two pairs of stabilisers that work at anchor to increase onboard comfort when the yacht is stationary, particularly in rough waters. Powered by two MTU (16V 4000 M63L) diesel engines and propelled by her twin screw propellers, Elements is capable of a top speed of 18 knots.

Originally commissioned to be built for an owner who made some minor changes before suddenly pulling out of the deal, Mr Fahad Al Athel made the bold decision to continue with the build himself, hiring renowned Italian yacht designer Cristiano Gatto for the interior. “I asked Cristiano, who I knew from before, if he would work with me on Elements. He is an excellent designer, I would recommend him for any design job, and I will always use him from now on.” Enlisting the likes of Yachting Protection for all paint and fairing, and Vibrascan for noise and vibration study, the finished result is an oceangoing vessel of indisputable status, with a volume of 2,900GT, and key features that include a beach club, spa pool, hammam and an elevator to provide convenient access to her four voluminous decks. Her opulent interior is cast in cool shades of silver and blue, with inbuilt cabinetry at every turn, as well as key pieces of specially commissioned stand-alone furniture. Marble pillars and crystal chandeliers combine to great effect, punctuated by royal blue and sea-green silks and fabric detailing.

“Elements is a fantastic yacht, I’m proud of every bit of her,” says Mr Fahad Al Athel. “It’s very hard to achieve a yacht of that quality for that price, but I want to have the best of everything. It took me time, especially with the Lloyds certification, but we now have an amazing team. When people visit the yard, they want to see Elements, and they’re very impressed with what they see.”

As one of the rare shipyards in Europe with its own in-house interior workshop, Yachtley strikes a keen balance between in-house workmanship and sub-contracted exterior suppliers. “We have a Turkish naval architect, Turkish and Greek engineers, including Kostas Christodoulou, the manager of the shipyard who is an expert in electronics and helps me a lot - they are all of an excellent standard,” he says. “We also boast top quality carpenters, and I bought the latest machinery to enable them to deliver a premium job. The shipyard carpenters have completed work on my residential properties as well, and the quality is perfect. We source nearly all materials from Turkey too, apart from the marble, which we source from Italy.”

Starting sea-trials as FRASER went to press, Elements marks the dawn of a new age for Mr Fahad Al Athel and the Yachtley shipyard. Always keen to go beyond the expected, he leaves aside convention, and instead opts for the unity of aesthetics, safety and function in modern, customised designs. Collaborating with proven naval architects to create yachts with elegant lines and curves, Mr Fahad Al Athel has his sights firmly set on the future of hybrid yachts, SOLAS yachts and ground-breaking design concepts.

“After Elements, we’re hoping for more orders. We are ready - I have the team, I have the capacity to build bigger, we can go up to 120m,” he says, “and that’s what I want, to keep building large yachts of this calibre, that’s the aim.”

This article originally appeared in issue XIII of FRASER Yachting Magazine – the intelligent magazine for living, loving and luxury yachts. 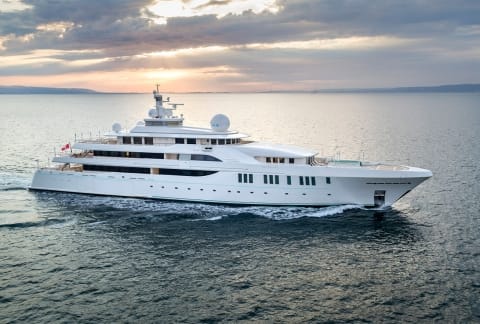