Fraser and Porsche Celebrate at the 2018 Dockside Owners Soirée

Fraser, the world’s leading full-service yachting company, is delighted to announce the winner of the fourth Yacht Management Captain of the Year Award. The award was presented at the annual Fraser Dockside Owners Soirée which was co-hosted by Porsche this year on November 3rd, held at the Winward VIP Club at the 59th Fort Lauderdale International Boat Show. 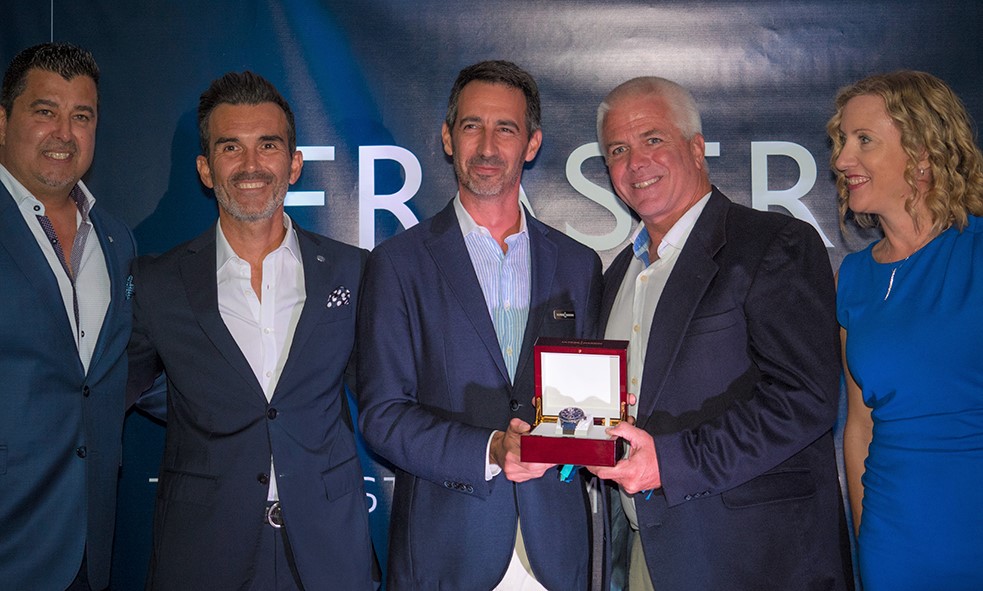 Fraser recently introduced this award to recognise the Captains who successfully manage their yachts effectively with the Fraser management team. The Charter Captain of the Year Award has long recognised Captains who work on Charter yachts, whilst this award can be won by Captains also working on private yachts or even on a New Build project. All departments at Fraser are involved in the nomination of candidates and a short list is then reviewed by a senior judging panel with the winning Captain being chosen based on a range of attributes including precision and punctuality in accounting and cost control, management of the crew and the safety culture on board, respect of the planned maintenance on board and the happiness of the Owner and his guest.

The 2018 Yacht Management Captain of the Year Award was won by Captain Todd Lee of motor yacht MY SEANNA. He has been working with his current owner for over 6 years and during that time has cruised extensively between Europe and the Caribbean and as far as Tahiti for special booked charters. He was nominated for his remarkable longevity with his crew and close work with Fraser’s management team to maintain continued compliance for the yacht.  Captain Todd is recognised as demanding but fully dedicated to obtaining the best results for the Owners; and with a transparent and positive approach.

The award was presented by Raphael Sauleau, CEO of Fraser and Mike Busacca, Chief Operating Officer and U.S. Commercial Director of Fraser, who were joined on stage by Francois-Xavier Hotier, President of Ulysse Nardin North America, who sponsored the main prize of a Marine Divers Chronometre Ulysse Nardin watch. Other prizes included a 3,000Euros electronics voucher kindly offered by UJET, 2,500USD cash prize from MHG Insurance Brokers, a 1,000USD travel voucher from Global Marine Travel, two luxury travel bags from Porsche, three days of free berthing at both Port Adriano and Marina Ibiza and dinner for two people at a Michelin Star restaurant in the Balearic Islands courtesy of Port Adriano and IPM Group. Other sponsors who made the night possible include Wenthur Law Group, Perrier Jouet and Pernod Ricard, California Audio Technology, and Delta Private Jets.

After the award presentation, guests enjoyed live music, delicious hors d’oeuvres, a champagne and cocktail bar courtesy of Perrier Jouet and Pernod Ricard, and a cigar rolling bar. Guests could also test out beautiful Ulysse Nardin timepieces in the comfort of the Winward VIP Club.
back to list
Share this page