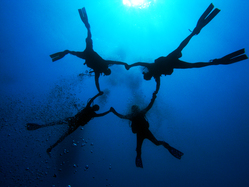 There are many great dive sites in the world to visit on your luxury charter yacht, but there are some that offer an experience so unique that they deserve to stand out from the crowd. This is not a list of the world’s top dive sites, but more a collection of unique dive experiences – whether that’s diving into a tuna vortex off the coast of Malta, swimming with sea lions in the Galapagos or diving wrecks on a monumental scale. If you’ve always dreamed of seeing a whale shark, how about seeing up to 100 at once? And what about the opportunity of swimming with more than two million stingless jellyfish? Image by Mark O'Connell
Here is our roundup of some of the most unusual dive experiences on planet Earth. Sardine Run - South Africa Dubbed the “Greatest Shoal on Earth” by wildlife film producer Peter Lamberti, the sardine run follows the annual sardine migration along the Indian Ocean coastline of South Africa, where the sardines form into hundreds of swirling shoals. Though the silvery banks of twirling sardines are already spectacular, what makes it such a unique dive event are the accompanying outriders of hundreds of pelagic predators, preparing to feast on the migrating sardines. Watch out for: The ‘bait ball’, when sharks, dolphins or other predators cleverly corral a shoal of sardines into a tight ball, before diving into the middle of it and coming away with great mouthfuls of sardines. What to see: Sardine aplenty, but also sharks, dolphins, seals and breaching humpback whales. When to go: Mid-June to mid-July. www.sardinerun.net Floreana Island - Galapagos
Image by Mark Rowland
Unsurprisingly, the Galapagos Islands have some of the best diving in the world with frequent sightings of hammerheads, mantas and whale sharks. There are hundreds of different dive sites across the islands but many of them are characterised by strong currents and only suitable for very experienced divers. Floreana Island has nine dive sites with generally calm waters and is one of the best places in the Galapagos to dive with sea lions – perhaps one of the greatest dive experiences of all. Watch out for: The sea lions that will spin, twirl and circle around you for the entire length of the dive. They are the ultimate dive buddies. What to see: Sea lions, turtles, rays, and whitetip reef, Galapagos and hammerhead sharks. When to go: Year round.
Tuna Vortex - Malta In Malta’s marine adventure park live the famed tuna pens, each one containing 350 tonnes of bluefin tuna. In partnership with the marine adventure park, you climb over a ring of floats into the nets and then drop down into a swirling mass of shoaling tuna. To begin with it just looks like a vast silver wall, flowing past you at a constant 4 knots. Each pen holds around 1,000 tuna and it is a truly humbling experience to float in the very heart of them.  Watch out for: The bubbles of your fellow divers being sucked downwards by the vortex of speeding tuna. Truly bizarre. What to see: Tuna, tuna everywhere,
Great White Wall - Fiji Think Avatar underwater. Timing is everything for this dive in the famed Somosomo Straits. You have to catch it right at the turning of the tides, otherwise all you will see is a barren cliff face. But time it right and this is one of the world’s most spectacular dive sites, all in glorious technicolor. The dive begins in a cave at 15 metres, from where you swim through on to a cliff face of incredible beauty. The soft corals come out to feed in dazzling UV white as far as the eye can see. It is absolutely magical. Watch out for: A secondary cavern that takes you up on top of the wall to part of the rainbow reef, a 30-kilometre stretch of exquisitely kaleidoscopic soft and hard corals. What to see: Incredible technicolor corals in glorious profusion, passing pelagics and turtles, excellent reef fish, morays and lionfish. When to go: Year round. Truk Lagoon - Micronesia Recognised as the world’s greatest wreck diving destination, as the lagoon is a sheltered harbour it has good visibility and few currents, making it perfect for exploring a stunning array of different wrecks. More than 60 Second World War Japanese warships and aircraft from the Japanese Imperial Fleet were sunk here on the shallow depths of Truk Lagoon during Operation Hailstone in February 1944. Watch out for: The Fujikawa Maru, a 132-metre aircraft carrier with accessible hulls full of fighter planes, guns and ammunition. What to see: Submarines, fighter planes, warships, aircraft carriers, cannons, tanks and jeeps. When to go: Year round.
Image by Matt Kieffer
Holbox Island - Mexico If one of your great dive ambitions is to dive with whale sharks, then this is your dream destination. It has been a marine natural reserve since 2006. July brings the largest known whale shark migration into these waters. It is not uncommon to see shoals of more than 100 whale sharks all basking together, and they are nearly always accompanied by large gatherings of friendly mantas. Golden rays are another common sight, in shoals of up to 500. The numbers alone are out of this world. It is a truly unique dive experience. Watch out for: Breaching manta rays, hanging out with the whale sharks. What to see: Literally hundreds of whale sharks feeding together, countless manta rays. When to go: Mid-July.
This article was featured in Fraser Yachting Magazine
back to list
Share this page