No-One Deserves to Die at Sea 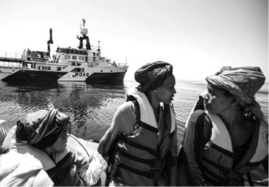 On 7th June 2015, a flotilla of vessels was involved in the rescue of thousands of migrants adrift in the Mediterranean Sea. Alongside the naval and coast guard vessels there was just one private boat – a dedicated search and rescue vessel called Phoenix. Representing the Migrant Offshore Aid Station, Phoenix was the first boat on site and later coordinated the rescue efforts before heading to Sicily to disembark some 372 people, including 126 women and 62 children.
The extraordinary story of how one family were motivated to set up MOAS (the Migrant Offshore Aid Station) began just two years ago. a family cruise from Tunisia to Lampedusa became a life-changing event when the guests, Regina and Christopher Catrambone, noticed a winter coat floating in the water. The captain told them that the owner of the coat would probably be lost at sea, one of the thousands of migrants who attempt the perilous journey from Africa to Europe. 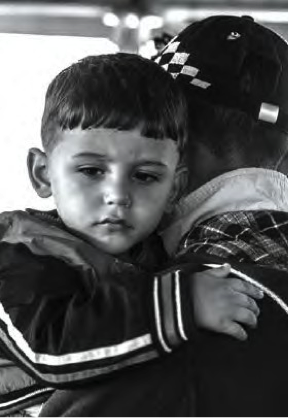 The loss of one life was sad enough, but when the Catrambones arrived in Lampedusa news was breaking of a much greater tragedy making headlines around the globe. Over 400 people had drowned within sight of the shore, focusing the world’s attention on a drama that’s been playing out for decades. Pope Francis visited the scene and implored people to do whatever was in their power to do. Regina tells how the family were moved to action: “all our conventions, all our laws, our humanity tells us that we need to save them – we must save them.” Their contribution, however, went much further than a simple donation to charity. Instead, they bought a 40-metre (130 ft) expedition vessel, the Phoenix, and set up MOAS, putting together a stellar team: Brig. (Ret’d) Martin Xureb, Malta’s ex-chief of experience of search-and-rescue missions. Marco Cauchi was put in charge of onboard operations. He spent 20 years in the Maltese military, commanding patrol vessels and working with the coast guard and anti-terrorist agencies. The first MOAS missions in 2014 saved nearly 3,000 lives in just 60 days. This year, international charity Médecins sans Frontières offered their assistance – a team of five including two doctors and a nurse now joins each voyage. Phoenix saved 1,441 lives during her first voyage in May 2015, and to date has saved a staggering 8,910 lives in total. The total estimated number of lives lost at sea during this migration crisis has today soared into the tens of thousands, with well over 200,000 migrants having attempted to make the journey in the last year alone. 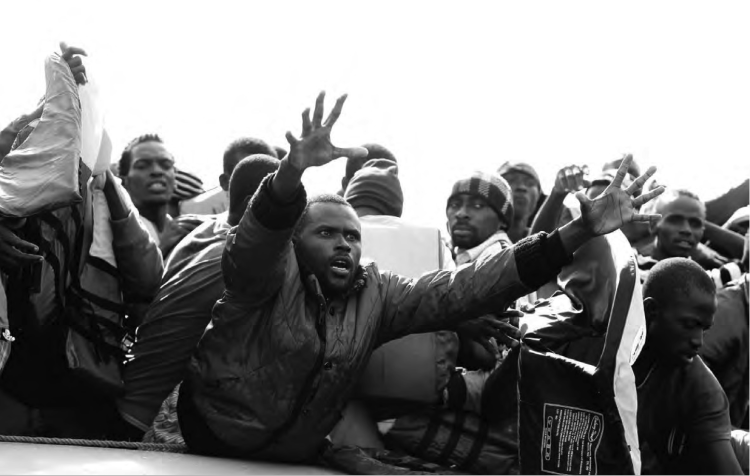 Although the desire to do something was born of an emotional reaction to terrible suffering, the Catrambone’s and MOAS’ response has been wonderfully pragmatic and effective. They are keen to point out that MOAS is not a ferry service simply carrying migrants from Africa to Europe. Rather they work under the direction of rescue coordination centres to respond to vessels in distress, rescuing or transporting only as ordered. Their mission is simple: MOAS’ unofficial motto is ‘no-one deserves to die at sea.’ The family, and MOAS, are based in Malta and Phoenix’s shore-side agent is Matthew Gusman, general manager of the Alliance Yachting Company, who also runs the Fraser Yachts office in Malta. “The Mediterranean can be a terrifying place – these people must be really, really desperate to jump into shoddy looking craft and try to cross such a treacherous stretch of sea,” he says. “I knew the same thoughts had gone through Chris and Regina’s minds: ‘no-one is doing anything concrete about this – to hell with it – we’ll do it!’ And they did it. They’ve set a real example. I hope that other yacht owners will decide to give some money to help keep MOAS going - they understand what it takes to run a 40m vessel!” 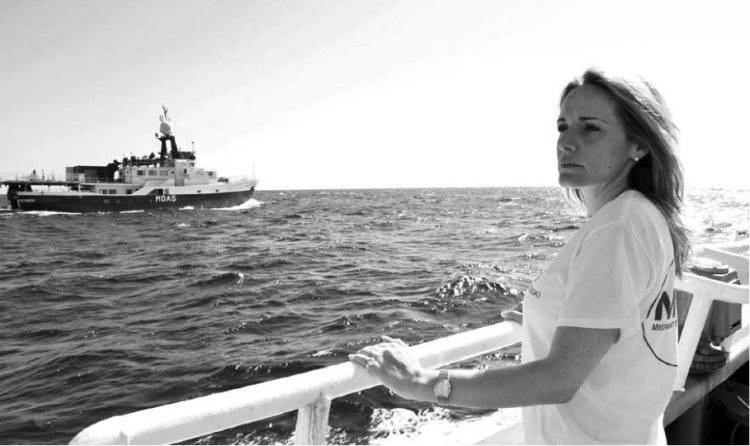 Regina continues to be a passionate advocate for MOAS. As well as getting involved in the rescues herself, she’s also promoting the crowdfunding that will literally keep the project afloat. “The future now depends on donations - last year it was funded by my husband and I as a pilot project to prove the concept, but clearly that is not something that can be sustained.” MOAS needs a lot of specialist equipment, as well as the high- speed RIBs Phoenix deploys when she encounters vessels in distress, there are two heli-cam drones, which have proved to be vital tools. “We undertook seven rescues from 2nd to 20th May this year,” says Regina. “Five of these were discovered thanks to the drones, but they are expensive to operate.” The drones dramatically expand the search area as they seek for boats in distress close to the Libyan shore. They can then be assessed and, if needs be, rescued early into their voyages before real disaster strikes. The drones carry regular and thermal-imaging cameras – the latter can find small inflatable boats that are virtually impossible to pick up on RADAR. Regina explains why this is so important. “Many of the tragedies we see are from this type of boat because they deflate and become unstable. With the drones we can find them and share the footage with the Maritime coordination centre so they can set up a search and rescue operation.” 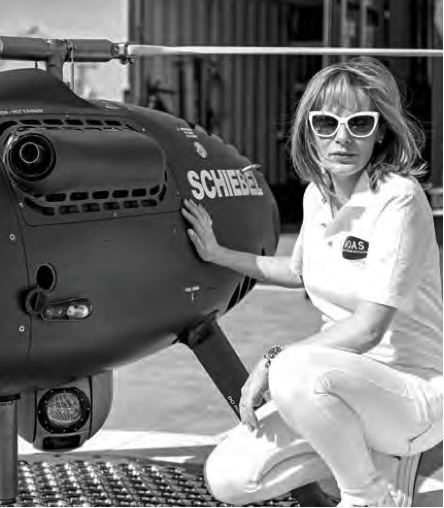 If Phoenix is asked to take migrants on board, a member of the Catrambone family is often there to help. Regina and her daughter Maria Luisa (who took a gap-year from university to get involved) found that the rescued women would often confide in them about their long journeys from persecution or war at home to Libya and onto the boats. Many have experienced unimaginable horrors. “One woman told me when she arrived in Libya, they divided the men and women into two rooms,” says Regina. “Each was only four metres square, with 60 or 70 people crammed in. The traffickers would come into the women’s room and attack them. The woman i spoke to was raped many times – but she tried not to cry or yell too much because she didn’t want her husband in the room next door to hear…” The real power of MOAS is that it not only saves lives, it gives the migrants a voice and restores their humanity. As Regina says: “I try to put myself in their shoes and realise that I am very lucky because I’m Italian, my husband is American, and we could move to Malta without any problem. But what if i was from Syria, or Eritrea and I needed to move? What if there was a war and I wanted a better future for my daughter? These people need to be humanised again. They are not parcels, or cattle. These people are being treated worse than we treat animals.” 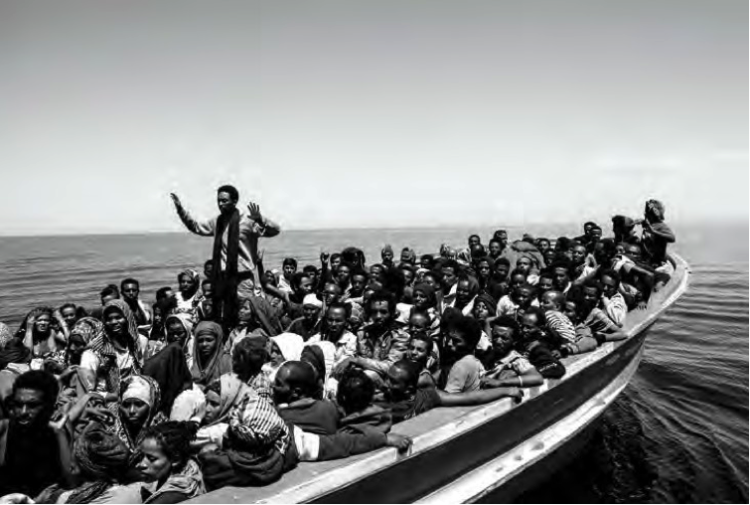 The team at MOAS have proved that individuals can make a difference. In order to continue with their work, they need donations – and that is something that we can all help with. We sail the same sea, albeit in vastly different vessels; the fortunate for pleasure, the desperate as a means of escape. The final word should go to Regina, an inspirational woman who sees us all as simply humans, no matter our background, colour or creed. “I have always believed that the more luck you have, the more wealth you have, the more responsibility you have. You have responsibility for your own family and for society. We are not living alone, each of us builds society and each one of us has the power to exercise our free will and improve the situation.” MOAS (Migrant Offshore Aid Station) is a registered Foundation (VO/0939) dedicated to preventing loss of life at sea. Founded on private investment it now depends on public donations in order to continue its mission of saving lives. If you would like to donate visit the MOAS website at www.moas.eu/donate and follow the instructions given or alternatively fill out the online form on the MOAS Facebook page. This article is taken from issue XI of FRASER magazine, the intelligent magazine for living, loving and luxury yachts. Read it here.
back to list
Share this page