On board 26m/86' superyacht Haze with the Owner

Three decades after dropping out of school, the owner of 26m HAZE, UK-based entrepreneur Steve Rigby, talks about finally making his first foray into superyacht ownership.

The following is the full article which you can also view on Boat International. 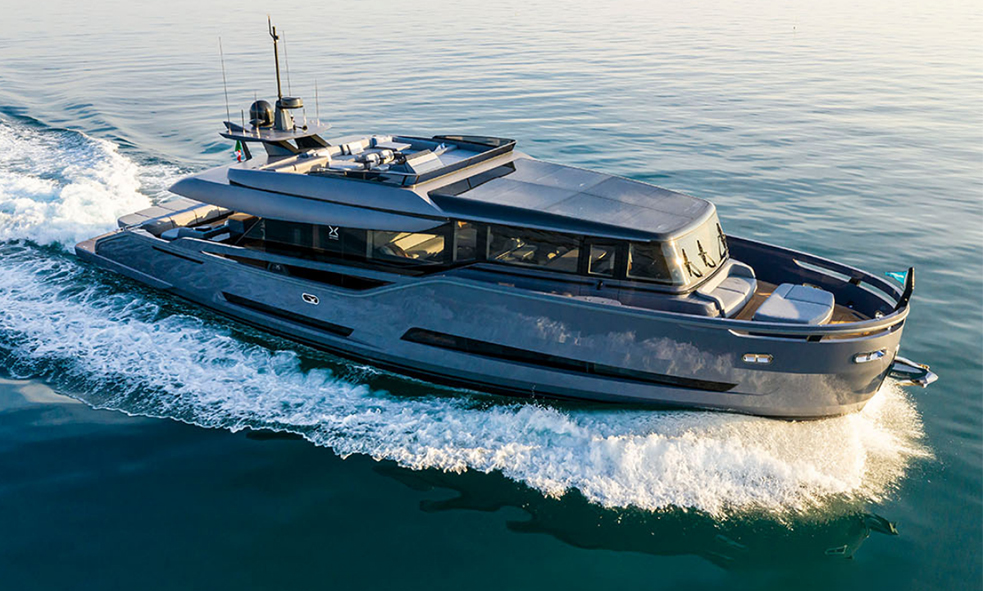 “I have been dreaming about owning a boat ever since I was a young man,” says energetic British businessman Steve Rigby. “It is a big commitment financially, so it just took me a bit of time to build up the courage.”

Having built up that courage, and nearly a decade of charter experience, Rigby decided there wasn’t anything on the water that met his requirements; so rather than buy a boat, he opted to build one. “A new build seemed the obvious route for me because I didn’t particularly like the traditional format of motor yachts,” he explains. “I wanted something that was stern-orientated and there are very few of that style of boat.”

Rigby considered various options, including models from Arcadia and Wally Yachts, before opting for Extra Yachts’ 86 model, which features naval architecture by ISA Yachts. He bought the yacht without a broker and, in 2020, 26.2-metre Haze was delivered. “I really enjoyed the design process,” he says. “I might do a couple of things differently [next time], but broadly it was a good learning experience.” Sporting a “penthouse feel”, the yacht has a full-beam master suite, 50-square-metre beach club and panoramic windows. Crucially for Rigby, she can sleep up to eight guests, but the yacht works equally well when just he and his wife, Claire, are on board.

As part of creating this homely feel he has recruited a “small and personal” crew of four, including BOAT International columnist Eddie Jordan’s former captain, Tim Beebe. Haze’s layout, with the galley on the main deck, means that there is a constant dialogue with the Croatian chef. “We like an informal style; we are not hierarchical,” Rigby says. “We don’t want people to be on watch; we are happy to serve ourselves drinks or to get drinks for them. Tim is a great guy, and we would be friends with him outside of our boating life.”

Despite Covid-19 limiting some of Rigby’s initial plans, he wasted no time in getting to know the yacht last summer. After joining the boat in Sicily, the couple spent time on the Amalfi Coast and the surrounding islands, taking advantage of the reduced summer crowds. “Capri was beautiful,” he says. “I have never been to Capri when it has been so quiet before. It was lovely.” They then went on to Sardinia and Corsica before returning to the South of France, where Rigby enjoyed a “boys’ trip” on board.

The yacht is wintering in Savona in Liguria, and Rigby has no intention of her crossing to the Caribbean for winter seasons. “The boat doesn’t really suit the Caribbean,” he says. “She’s a Med-only boat.” After the winter, Haze is set to head for Turkey, where she will be based for the summer and available to charter with Fraser. “The plan is to spend five weeks on board each summer,” he explains. “One with my family, one with Claire’s family and the rest either by ourselves or with friends.” Steve’s three children from his previous marriage were able to enjoy their first trip on board Haze last summer. “The kids love the watersports and, as they get older, the rosé and beer flow quite a lot,” he says, with a wry smile. “They created this thing called rock beers, where they took a paddle board, found a rock somewhere and had a few beers on it. I have no idea why.”

Unfortunately, I am not meeting Steve for rock beers; instead I’m visiting him on a chilly winter’s day in Mayfair at the London offices of Rigby Group PLC. A self-confessed rebel, Rigby left school at 16 and joined his father’s business. Over the past three decades he has been involved in the exponential growth of the conglomerate, which is based around technology, aviation and real estate. With businesses within the portfolio ranging from UK airports – including Bournemouth, Exeter and Norwich – to IT services company SCC, there is plenty of variety. His father, Sir Peter Rigby, is now in his late seventies and while he remains as chairman, Steve is co-chief executive officer alongside his brother, James. The firm now employs 8,500 people with a revenue of more than £3.2 billion in 2020, and Rigby admits that his father has created “tough shoes to fill.”

“It always drives you on when you have a successful dad,” he says, “but there are lots of things that I have built and have my stamp on. We are a really well-functioning second generation.”

With the business flourishing, Rigby is now fully focused on ensuring its future success. “Everything I’m doing at the moment is to make sure it’s in safe hands,” he says. “The business will turn 50 in 2025 and it’s my job to make sure it turns 100 in 2075.” He admits that the firm’s new size means it is unlikely that it will be taken over directly by the next generation. “If it is going to survive the third generation, which is always the tricky generation, it needs to be run like a professional public company. So I hope that my children will find careers in the business and, you never know, somebody might be capable of running it in the future, but it is likely to be run professionally rather than by family members.”

Alongside his business interests, Rigby chairs the development board of children’s mental health charity Place2Be. “The plan is to give away a very sizeable amount of wealth during the latter part of my career,” he explains. “This position allows me to understand how charities work so that when we come around to our main phase of charitable giving, I understand how to do it.” Rigby is also a trustee of the Rigby Foundation, which invests in causes related to lifelong learning, health and education. “We’re trying to give away £100 million in the next 30 years. To do that is no small thing; you must think about it like a company in terms of what your objectives are and how you are going to use resources. It’s an important next phase for the family.”

Beyond his philanthropic and business efforts, Rigby is a passionate sportsman – a keen tennis player, skier, sailor and polo player. For a period, the latter was an all-consuming passion. “I used to be very obsessive,” he admits. “My son played for England, and we had 26 polo ponies. It’s a great hobby but it is like owning a superyacht finance-wise, if you are playing medium goal,” he says. Rigby still plays in at least a dozen matches a year but at a slightly less competitive level. “I don’t have the same wham-bam passion I used to have. I don’t have that killer edge any more,” he says. “However, having sold all my ponies, I re-bought some in the past couple of years. I blame being bored at home because of Covid-19, but I have only a handful.”

Rigby is also a regular on the regatta circuit and, until recently, owned a Swan 45. “I am being a bit more flexible to fit around the motor yacht,” he says, explaining the sale. “The problem is everything is in the summer, so it all collides, and I’ve got to do some work as well.” He still intends to keep racing, though, and plans to compete in the J70 class in the J22 St Maarten Regatta in March and the Copa del Rey in Palma this summer.

Perhaps not surprising for a man as driven as Rigby, he already has half an eye on his next yachting project. “It drives my wife mad but, like most boat owners, I am already thinking about the next one,” he admits. “Haze is really good for four or six [people], but it starts to be a squeeze at eight. The issue is that if we want to have more friends and family on board then we have to start going through the size range.”

He is hoping that he might also find a way to combine his passion for sailing with superyachts. “I am actually thinking about a catamaran,”  he says. Rigby feels that a cat would allow him to maintain the intimate feel that Haze currently has, while also offering more space and allowing the opportunity to send the yacht to the Caribbean in the winter. “To get that kind of space we would need to buy a 45-metre sailing boat, which we could do but that would significantly change the investment, the number of crew and the cost of the operation,” he says. “Whereas I can step into 30 metres of cat, and  I have pretty much got everything I need. There are some interesting things happening in that space. So I think that is where my head is going.” It seems likely that Rigby’s dream of owning a boat might be about to come true once again. 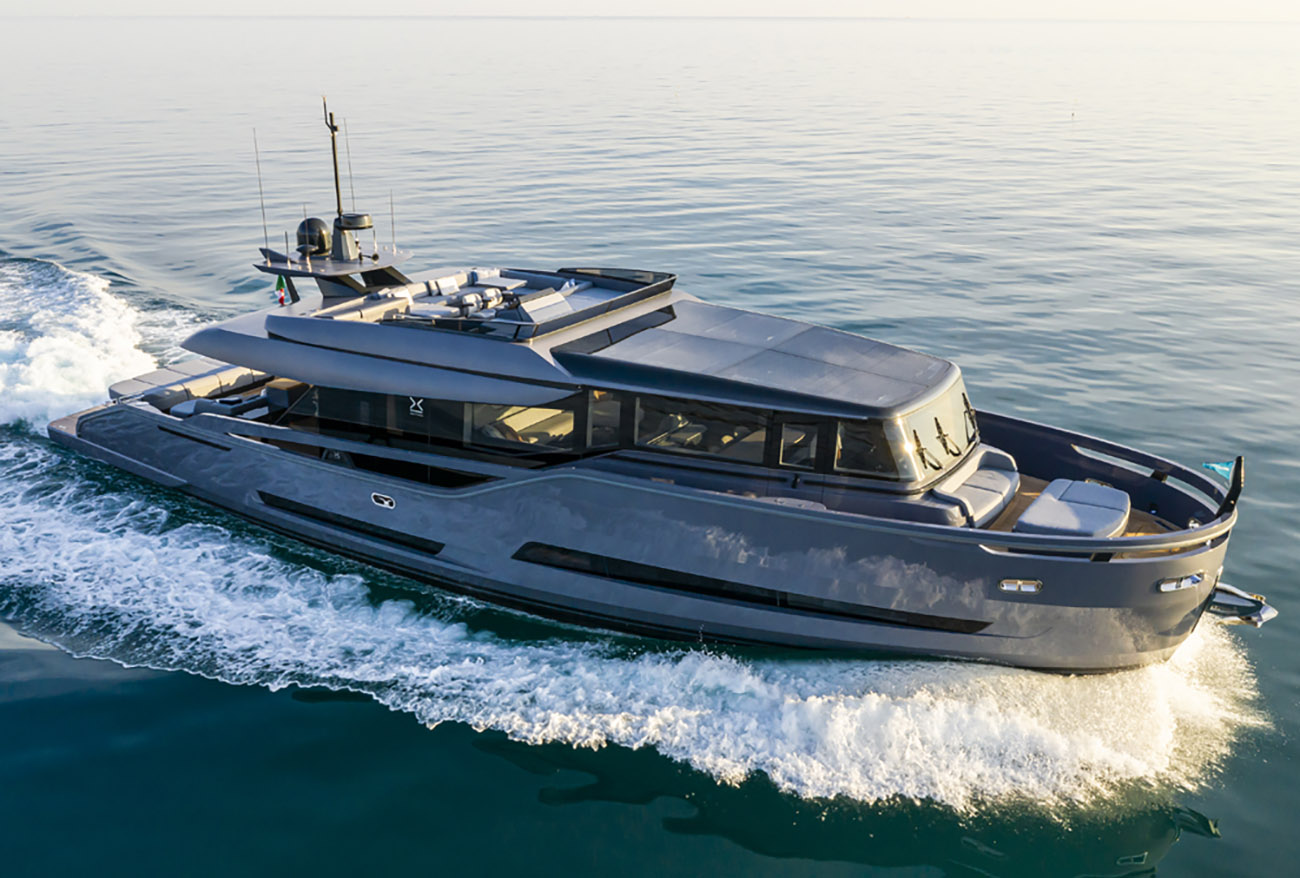