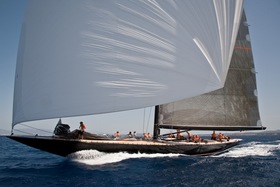 There are many fast, beautiful and comfortable sailing yachts on the water today but achieving superior comfort levels while achieving high performance is a tricky balance. The truth is that if you want to be fast, really fast, comfort will always have to take a back seat. For the owner of S/Y FIREFLY there was only one way to avoid the speed/comfort compromise: buy a motoryacht as well.
S/Y FIREFLY is a purebred racing machine. Launched by Claasen Shipyards in May 2011, she was the world’s first F-class, a new class conceived by her owner and the yard to merge the spirit of the J-class with the performance of a maxi racer. Her owner came to Claasen and Hoek Design wanting a yacht that would be faster than the Js in light and heavy winds, look like a J above the waterline, but have a modern keel. “Speed was very important,” says Joachim Kieft, managing director at Claasen Shipyards. “He came up with an extremely lightweight interior, basically with hardly any interior fittings at all; just the essentials. For example there were only bunk beds on delivery.” It was clear to the owner from the offset that for practicality and comfort sake, he would need to make another yacht purchase.

Meanwhile in Turkey, 36.4m M/Y BARTENDER (ex Nomade) was being spec built at Tansu Yachts. The third yacht to come from Tansu, M/Y BARTENDER, with her solid military lines, round portholes and an impressive amount of outdoor space, made the industry sit up and take notice when she was presented at Monaco Yacht Show that year. Breaking the shiny, white superyacht mould, she introduced an entirely new concept; the Mothership series. “The Mothership series is an open type explorer yacht series,” explains Riza Tansu, the Turkish yacht designer, builder and owner. Describing how unlike on traditional motor yachts where interior spaces are maximised, the series favours wide, open spaces outside and more enclosed, comfortable interiors. “The yacht favours exterior areas, meaning there is a maximum amount of space outside for entertaining but also for storage of tenders.” Just 15 days after being listed as for sale, M/Y BARTENDER was purchased by the owner of S/Y FIREFLY. “S/Y FIREFLY is a pure racing yacht and the owner really wanted a comfortable yacht to go with her,” explains David Legrand, a sales broker at Fraser Yachts. “M/Y BARTENDER fit the bill.” Finding a motor yacht for a true sailing yacht owner is not always a straightforward task. Typically, motor yachts do not cater to what attracts sailing yacht owners; a sense of adventure and connection to the sea. “The beauty of the Mothership series is that it is a paradoxical design,” says Legrand. “M/Y BARTENDER is a motor yacht for a non-motor yacht owner.” Since her launch and racing debut at the Superyacht Cup in Palma in 2011, S/Y FIREFLY has gone on to become the one to beat on the regatta circuit, most recently winning the Loro Piana Superyacht Regatta in Sardinia in June this year.

M/Y BARTENDER comes along as a comfortable refuge for guests and race teams to stay on during the regattas, but the owner also regularly cruises with his family on board. Now, after three years dominating the racing circuit on his F-class, he has a new project in the pipeline. “The owner is in the process of building a J-class with us,” reveals Claasen’s Kieft. “S/Y FIREFLY is like a start-up J. But the owner now wants to join the world of the Js.” This is no small undertaking; Keift explains that to be a true J-class, the yacht must be built based on existing designs and line plans from the 1930s. As a result, a J-class yacht can be up to a third more expensive than a yacht like S/Y FIREFLY. The 40m new build is set to be completed in Spring 2015 and in order to make way for it, S/Y FIREFLY has been put up for sale with Fraser Yachts, ready for a new owner to lead her to victory on the racing circuit. M/Y BARTENDER, however, will stay where she is; ready to become part of a new dream team with the newest J-class. The future owner of S/Y FIREFLY may not be able to keep the original motor and sail duo together but Tansu Yachts is offering a new member of the Mothership series to the market. Set to be launched later this year, the 39m M/Y CUTLASS will be an evolution of Bartender, with an added sky-lounge, redesigned captain and crew areas, and central interior stairs. “We want to encourage more people to do what the owner of M/Y BARTENDER is doing,” says Legrand. “The Mothership concept offers the comfort while the sailing yacht offers the speed and excitement. That combination allows owners to cruise and race anywhere in the world, even if it is really remote.” As with M/Y BARTENDER, M/Y CUTLASS’ aesthetic is the perfect foil for a boat like S/Y FIREFLY. Both yachts are extremely high tech but with wildly different approaches to design; one very classic, the other very modern. However, central to both boats is a connection to the ocean.

“Spending your time inside on a yacht is a let down and disconnects you from the most important thing: the sea,” Tansu says. “Mediterranean living for us is defined by being outside and close to the sea. M/Y CUTLASS, like the other Mothership vessels, favours open spaces to enclosed spaces, kind of like having a nice house with a huge garden, rather than a condo in a skyscraper.”

Tansu stresses that race-oriented sailing yachts like S/Y FIREFLY are beautifully purpose built for the specific needs of racing but as a result are not designed for cruising. “It is usually impractical for the whole team or guests to live on board a true racing yacht,” says Tansu. “And in order to enter beautiful, secluded bays, a yacht needs good tenders. In the Mothership series, we have large rooms and space for up to 10 guests to enjoy being on board together or privately, as well as tenders that are easily launched and retrieved, without the need of a malfunction-prone garage door.” Legrand observes that as cars get faster, planes get bigger and boats get longer, it becomes more crucial to find the right balance. “The client who buys Cutlass is different to the standard motor yacht owner,” says Legrand. “They will be someone very close to the sea and to the sailing boat feeling. Just think, for less than 15 million euros you can have a superyacht playground that is normally only accessible on a 70-metre boat. This is a very attractive opportunity.” This article and images originally appeared in the Fraser yachting magazine
back to list
Share this page