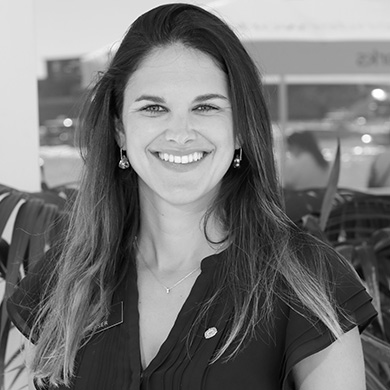 Alexia joined Fraser as a Charter Manager in early 2017.

Born and raised in Monaco in a multicultural French & American family, Alexia grew up with a desire to travel and discover many countries.

Alexia is resourceful and always looking for new challenges. She is an outgoing person who enjoys the interaction with people. Raised by the sea, she always had a desire to work in the yachting industry. She is also part of YPY (Young Professionals in Yachting) in Monaco, a non-profit organisation which was formed to educate, promote ethical business practice, and ultimately facilitate success for young professionals within the worldwide yachting business community.

After high school graduation (International Baccalaureate, IB) she moved to Spain at the University of Salamanca and thus became trilingual in French, English and Spanish. She then completed a BA in Corporate Communications double degree from the Skema Business School in Sophia Antipolis in France which included a two-year experience at the College of Charleston in South-Carolina, USA.

Prior to joining Fraser, Alexia has worked for the French Club Mediterranean Resort in hotel management and in Sales & Marketing for a high-level sports academy in Florida. Most recently, she has been working at another larger yacht brokerage in Monaco in Charter Marketing.

Aside from her interest for yachting, Alexia has a passion for sports especially tennis, running, swimming and golfing. She has competed several athletic races such as relay marathons and triathlons. She enjoys traveling and discovering new cities and cultures.

FraserYachts
At Fraser we want to provide you with the best user experience whilst you are visiting our site. To enable this, we use cookies which store small amounts of information from your browser. You can learn more about our Cookies Policy here. Thank you and enjoy your visit.