Ask any yacht broker or charter management company what the most important aspect of a yacht is and chances are they’ll respond the ‘crew’. Utmost professionals - the finest in their field - the yacht’s Captain and his or her team ensure that each new charter group are made to feel like they are the only people that matter in the world. “Going over and above, that’s what we do,” affirms Don Lessels, Captain on the 50m Benetti yacht for charter, M/Y LUMIERE. 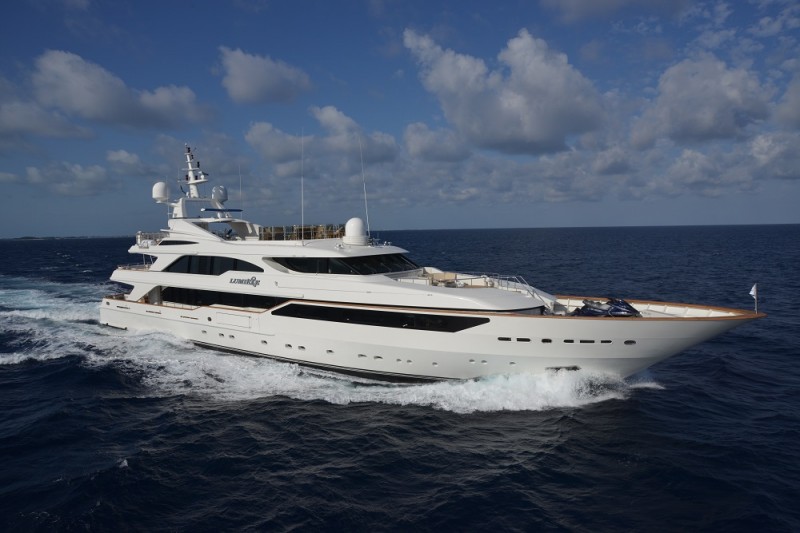 M/Y LUMIERE is a yacht that attracts repeat charterers season after season for this very reason. “There's one particular charter guest who, without fail, will come on deck at 7am because he wants to take the Jet ski out. So, we’ll always have the Jet ski hanging over the yacht by 6:45am in anticipation. That’s just part of what we do,” he continues.

Years spent sailing around the world have showed him that it is the authentic encounters that leave the longest lasting memories in a sea of privileged experiences. A shining light in the yachting industry, Fraser caught up with Captain Don at last year’s Monaco Yacht Show and met a Captain full of enthusiasm for his career and for off-the-beaten track yacht charter destinations.

Although Captain Don admits that the charter season is a busy one onboard M/Y LUMIERE, there are some destinations that he never tires of visiting, no matter how many times he returns. Fraser speaks to him at the end of another successful Mediterranean charter season that started in Turkey, a country he appreciates for its “tremendous hospitality.” From there, the yacht visited Greece, which “is always wonderful, [as] you've got the rich history of Greece and [its] architecture,” he says. “Then we went up to Montenegro, which is spectacular. I defy anybody not to say going up into Kotor is not the most beautiful area to arrive into,” he continues. “Magnificent” Croatia, as he refers to it, followed. “The cruising there is extremely good. Dubrovnik is beautiful. There are smaller versions of Dubrovnik as you go up the coastline and they're all impeccably maintained,” he enthuses. After crossing to Venice, the yacht sailed the boot of Italy to Sicily, then along the Amalfi Coast, towards Sardinia and Corsica. “We do a lot of mileage,” he laughs. 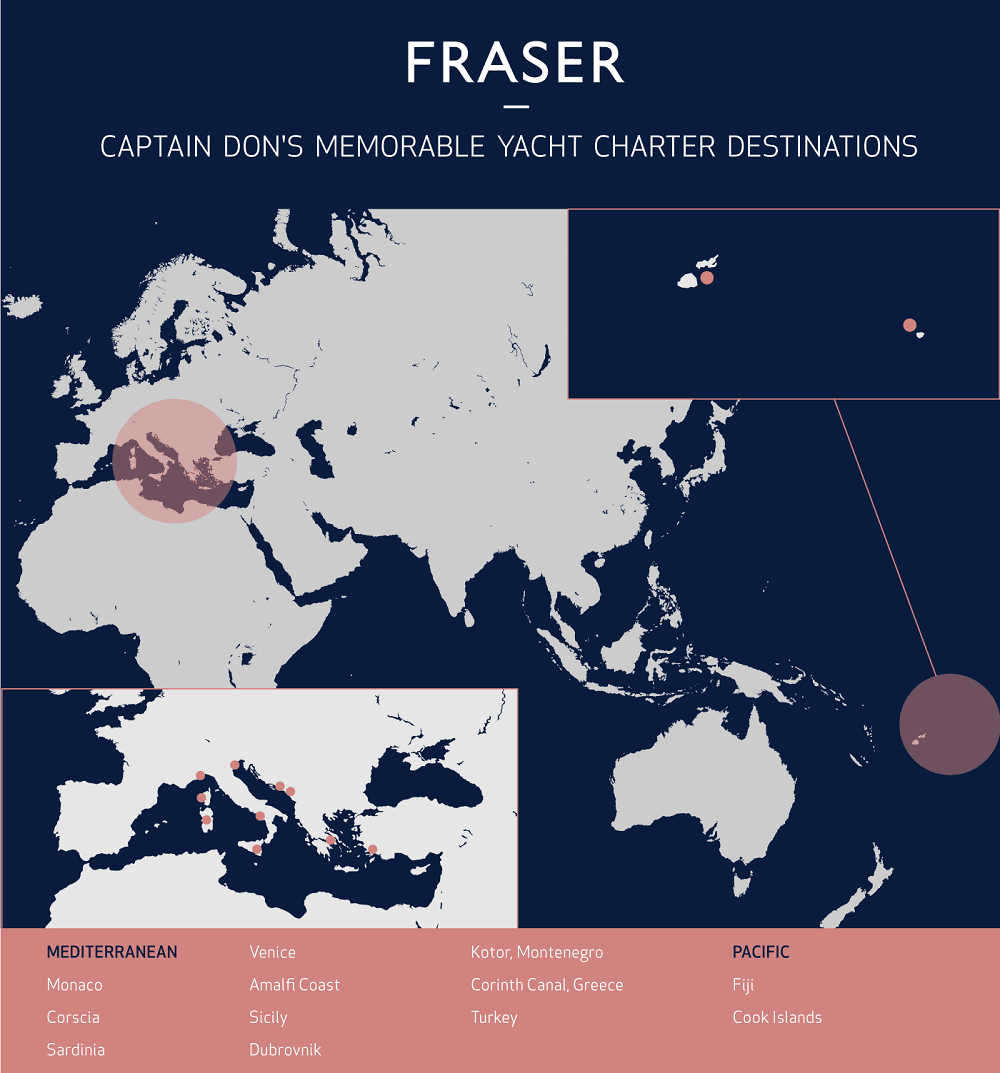 Of the incredible, varied destinations he has visited in his career, is there one that stands out as being particularly memorable? Captain Don struggles to name just a single example. “It’s a hard question as there are a lot of places that I think are beautiful on charter in the Mediterranean,” he responds, naming the spectacular arrival into the Corsican port of Bonifacio as one example and the dramatic walled city of Dubrovnik in Croatia as another.

Yet it is clear from speaking to Captain Don that the off the beaten track adventures had on South Pacific yacht charters have proved the most captivating. “I love Fiji,” he enthuses, calling the tropical archipelago “a magical area”. Along with an idyllic setting – complete with translucent turquoise waters, white sandy beaches and swaying palm trees - the country is renowned for the generosity and spirit of its population. ‘There is such a wealth of personalities,” he says. “You go to the outer islands, you come up and anchor in the bay and the fun part is the crew all [get involved]. You put a sarong on, which for a Scotsman is very easy. You go in with your Kava [a traditional drink] and you meet with the village elders and the chief in his house. You all sit cross-legged in a half-moon shape and you do the presentation of the Kava and you ask permission to stay in his territory, the bay.”

He recalls an occasion there when a crew member let slip that he had a set of bagpipes on board. “They had heard about bagpipes but they had never seen them,” he recalls animatedly. “So I fired them up, and all the children were sitting at my feet. I'm trying to explain to them that they have to move back about 10 feet, because they're loud. The more I started moving back, when I moved back, they moved back too, until I started them up and then they ran away!” Instead of glamorous superyacht hotspots such as St Tropez and Porto Cervo, an authentic evening in a remote Fijian village, illuminated by five kerosene lights rather than electricity, stands out for Captain Don above all others.

Captain Don’s enthusiasm for the original experiences of remote cruising areas is proof that yachting today is no longer only about modern marinas and Michelin-starred restaurants, but also locations in the world that really encourage a sense of adventure and offer a chance to give back to the community.

“Absolutely,” he agrees, using his experience in Gladstone Atoll, north of the Cook Islands, as an example. “When we came round into the bay there were all these canoes … just sitting there like little water beetles. Nobody was saying anything, it was a little bit strange.” In his “nice big sailing boat,” as he refers to it, he was unsure how to proceed. When he finally waved, he says, the scene erupted. “Everyone was extremely friendly. The chief, the doctor and the minister came on board to clear us in. Then they invited us to the island, and when we got there they had a big generator, which wasn't very old. A government had given them the generator, but nobody explained how to keep it maintained. It hadn't been running for about a year. I got on my radio and called up the Chief Engineer who came out with all filters and everything else. After about three hours, we hit the breaker and the lights came on in the village for the first time in a year. It was amazing.”

The experience didn’t end there: “Then we went down to the school. When we came into the classroom [all the kids] stood up and sang us a song of welcome. Then they went to play football, or ‘soccer’ as it's called. I looked at the soccer ball which was a little bit soft, it had a hole in it. I called the Bosun up, and said, ‘Remember that soccer ball we just bought?’ ‘Yeah.’ I said, ‘Bring the ball, I want 15 navy blue small and extra small tee shirts and 15 white.’ We came up and we gave them their uniform, with the beautiful graphic of the boat on the back of it, it was just an extremely memorable occasion.”

From our conversation with Captain Don, it’s obvious that the human element to yachting is what delivers the greatest rewards. “Family yacht charters are great fun,” Captain Don says. Tropical beach yacht charter destinations, such as the Caribbean and Pacific, are perfect stages for entertainment guaranteed to ignite young imaginations. “We do a lot of treasure hunts, where we’ll actually bury the treasure on an island and give the children clues,” he explains. Pirates, understandably, are another popular theme. “One particular charter had three young children; aged two, four and five. I’d asked the parents to bring some gold chocolate coins with them. We anchored up at this cave, which was the ‘Pirate Cave.’ In the morning … we scattered the treasure around this Pirate Cave. We collected the kids, and we paddled out. As we came through the entrance of the cave, the little one lit up. ‘Ooh, look, treasure,’ he said. Later that afternoon he was talking animatedly to his grandmother, saying: ‘Grammy, Grammy, we found treasure. The proper type you can eat!” he laughs.