8 Leading Women in the Yachting Industry 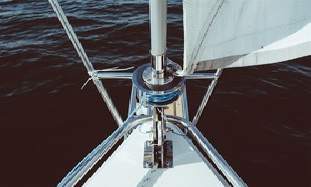 Following on from International Women’s Day on the 8th of March we take time to celebrate 8 key female figures in yachting. Trail blazers, pioneers, innovators…. Whatever your preferred term for them may be, these women have all paved the way for our own paths to success. In an industry where senior positions are largely male dominated, they are an inspiration for any woman forging her career path and building her own “tomorrow” in this fascinating industry. In no particular order, the women Fraser Yachts have chosen to celebrate are:
1. Maria Grazia Franco - Captain of 50M superyacht MARIU Current Captain of the 50m superyacht MARIU, Maria Grazia Franco was born and raised in Rome and developed an interest for the sea at a young age. Her key step career wise was her move to Australia in 1998, where she worked on a small cruise ship. She then progressed to large private and charter yachts. In 2002 she obtained an MCA Master 3000GRT certificate of competency, getting her first command position on a 38m sailing yacht. From 2010 Maria Grazia worked on two 60m+ yachts, including 2 years spent cruising and diving the South Pacific and a contract on a luxury sail assisted cruise ship before obtaining the command of MARIU. Maria Grazia is also an accomplished pianist, having obtained a Diploma at the Conservatory of Music in Rome at a very young age. Follow her on twitter @mg_franco
2. Alexia Barrier - Founder of ocean-research program 4myplanet and solo global sailor Alexia Barrier is one of the talented skippers of La Course au Large. An accomplished sailor who has raced Mini Transat, Figaro 2 and Solocean among others, she is also a world-class racer in Match Racing. Alexia lives on the French Riviera. She started sailing with her parents at the age of 3 on a 6m sailboat in the Mediterranean and on the Atlantic coast. She became a sailing instructor aged 15. Whilst pursuing her sports management studies at the UFR-STAPS Nice, Alexia worked in the yachting industry as a co-skipper or sailor on yachts of 36 meters or even 12mJI yachts (once the official boats for the America's Cup). Since then Alexia has gone on to become a professional sailor and has participated in many races worldwide. Follow her on twitter @Alexia_Barrier
3. Patty Elkus - Member of Director’s Cabinet of the Scripps Institution of Oceanography; Founding member and former board member of the International SeaKeepers Society; Board of directors for Mission Blue and the BLUE Ocean Film Festival Patty Elkus is an active philanthropist and community catalyst in San Diego with strong ties to San Francisco and the Silicon Valley. She serves on Margaret Leinen's Directors Council at the Scripps Institution of Oceanography, and on the Executive Board of Sylvia Earle's MISSION BLUE. Past Board positions include Board Member of the International Seakeepers Society of which she is a Founding Member, President of the National Charity League, Poway Chapter, VP PR Achievement Rewards for College Scientists/SD (ARCS Found. Inc). Chosen as one of MODERN LUXURY/Riviera Magazine's 2013 Altruists of the Year for her ocean advocacy, Patty's focus is oceanographic science and the environment, marine protected areas and emerging technology. A Member National of the Explorers Club, she was a member of the Elkus/Munk Explorers Cub expedition to Cabo Pulmo. Expedition travel includes Antarctica, the Amazon and the Galapagos.
4. Ellen McArthur, DBE - Founder of the Ellen MacArthur Foundation.

Dame Ellen Patricia MacArthur is a retired British sailor. A successful solo long-distance yachtswoman, she became the fastest sailor to circumnavigate the globe on the 7th of February 2005, an accomplishment which gained her international renown.  She is a founder of the Ellen MacArthur Cancer Trust, a charity set up in 2003, which works with hospitals across the UK to take young people who have suffered from cancer & leukaemia sailing, helping them regain their confidence. Following her retirement from professional sailing on 2 September 2010, MacArthur announced the launch of the Ellen MacArthur Foundation with the goal of “accelerating the transition to a regenerative, circular economy”.  Follow her on twitter @ellenmacarthur
5. Alice Huisman – Owner of Royal Huisman Established in 1884, the Royal Huisman shipyard spans five generations. Alice Huisman has been at the helm since 2004, taking over after the passing of her father Wolter, having spent 24 years herself at the yard. Since then, several superyachts have been built at Royal Huisman (57.9m Twizzle in 2010, 42m Hanuman in 2009, 89.9m Athena in 2004 among others)… and Alice herself has received the International Superyacht Society’s prestigious Leadership Award.
6. Laura Sessa – Interior designer As recounted in an interview for 71% magazine Laura Sessa’s job is to turn her clients’ dreams into reality. Her art lies in translating her clients’ tastes into an elegant and harmonious project. Passionate about her work, she is enthusiastic about every project she takes on and finds happiness only when her clients are satisfied with the project she has created for them. She has designed interiors for superyachts such as 80m Chopi Chopi, 75m Ebony Shine and 52m La Mirage.

7. Laura Dekker – Youngest sailor to circumnavigate the globe solo Dutch teenager Laura Dekker was born on a boat in the waters of New Zealand. One can say sailing is in her blood and she started her maiden voyage in Gibraltar on August 21st 2010 aged 14. She reached the island of Sint Maarten in January 2012 after sailing 27,000 miles. Ever since completing her maiden voyage, Laura has continued to update her blog whilst travelling around the Pacific Ocean (for the second time). Laura now lives in her birth country of New Zealand, aboard her beloved boat Guppy. Read her story on on her website.
8. The unknown woman Yachting is recognised as a largely male dominated industry but thousands of women are also an integral part of it…To all the women who work in yachting and who contribute to making it the diverse, fascinating and exciting industry that it is today….We salute you!
back to list
Share this page