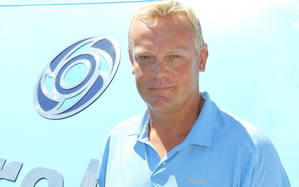 Guy Booth, the Captain of M/Y AURELIA, took time out of his busy Mediterranean yacht charter schedule to speak to Fraser Yachts about the distinctive vessel and its charter activity.

FY: Let’s start with you. How did you come to be a yacht Captain?

Guy: I’ve sailed all my life. My parents had a sailing boat. I took family holidays twice a year, for 25 years on their boat. After I figured out that accounting was not for me, I went off on an adventure and did a bit of competitive sailing. Then, in the late 90s, I found a job on a yacht. It was a 55-foot sailing yacht, which at the time was a big boat. I started out as a deck hand. From there, the path just laid itself out before me. I worked under really inspirational, clever, and patient Captains over the years that showed me that this would be the career for me.

FY: For how long have you been on AURELIA?

FY: It’s quite a distinctive looking yacht. Is there any particular reason for the sporty paint job?

Guy: Yes, absolutely. The exterior is painted in the colours of the Gulf Oil Company. Gulf Oil has sponsored GT motorcar racing since the 40s and 50s. In fact in the mid 1950s, the very first car manufacturer to use the phrase ‘gran turismo’ was the Italian carmaker Lancia. As prosperity had returned to Europe after the 2nd World War, they were starting to produce their regular cars, their family cars with a little more horsepower and better brakes, fancier upholstery. The first car to carry the term Gran Turismo was the Lancia Aurelia. This forms the basis for the yacht’s name – AURELIA. The connoisseurs consider this model of car the mother of GT cars. The whole boat, inside and out, is a nod to the history of GT motorcar racing.

FY: Is there any particular relationship between the yacht and racing industry?

Guy: No. Other than it is something unique. The Owner has nothing to do with oil. He is actually into racing horses. He celebrates horses and he’s a former top class jockey himself and owns several well-known horses. That’s his true passion. He wanted a tribute to speed, a tribute to history. He wanted a continuous idea that ran from the outside of the boat, to the inside of the boat, and included the name of the boat, the colours of the boat, and the interior design. There is consistency throughout. I’ve watched it dawn on the faces of hundreds of people over the last five years, and they see it’s not just a beautiful looking boat on the outside, but it has been very tastefully decorated on the inside. It’s beautiful.

FY: Would you say that the beautiful interior then is the most attractive feature of the yacht for a charter guest?

Guy: No. I wouldn’t say that. I would say that the interior of the yacht is certainly the most surprising aspect of the yacht for all of our guests. The outside of the boat is very loud but the inside of the boat is not quite the same. You could spend three or four days on the boat and still not see all of the very subtle tributes to GT motorcars. The interior of the boat’s not what people expect. It’s very soft and very comfortable. It’s full of natural materials: leather, wood, stone. It’s very low-key. Luxurious, but low-key.

I guess the most appealing is that the huge deck spaces, we’ve got a 45 square metre beach club. We’ve got a vast sun deck. We have just about every toy under the sun. We have a beautiful custom 10m tender – a chase boat in the same colours. It’s a fun boat. The charter guests we attract are young, energised people – family types that want to do lots of water sports.

FY: Which do you think is the most popular yachting accessory at the moment? Is there one that AURELIA charterers particularly like?

Guy: We’ve got them all. I think Seabobs are still one of the most popular. They can be used by young and old, novices and experts, and can cruise along at walking speed on the surface or they can be used flat out 10m down. They’re light, they’re fun and they’re reliable. They charge quickly. Jetpacks are amazing but not everybody will use a jetpack. Stand up paddleboards are also very popular at the moment. They are great for fitness and they’re very easy to learn. You can explore the coastline, the beaches, or caves. There’s no motor, no fuel, no maintenance needed on them. We’ve also got a custom-made carbon fibre kayak, a water slide, air chairs… we’ve got all sorts of gear on here that does get used, but it’s mainly the Seabobs and the paddleboards. We’ve also got a TIWAL sailing dinghy that’s extremely popular. It’s an inflatable, performance hull, carbon mast dinghy that sails very quickly, with sailors positioned just six inches off the water, so even at 6 or 7 knots, it really gives the impression of performance and speed as you’re so close to the water. It can be sailed by anyone – novices and experts alike.

FY: Where has AURELIA been cruising recently?

Guy: We have taken advantage of the change in legislation to charter Spanish waters. We have been chartering almost exclusively in the Balearics this year – Ibiza, Formentera and Mallorca. We’ve imported the yacht. She’s now EU-owned, EU-flagged, VAT-paid Commercial vessel. We’re currently in Mallorca.

FY: Where would you say is your favourite charter destination?

Guy: The Balearics, without a doubt. So much so that I’ve convinced the Owner of this yacht to go through this whole process to import the boat. There are so many beaches here. If the wind is blowing from the northwest, you go around the southeast side of the island, and vice versa. Down here, you just tuck around the other side of the island. The people are fantastic; the food is amazing; the yachting services are getting better every year. I think it’s the best place in the Med to charter at the moment. It’s safe; it’s not expensive. I think it’s new and exciting, and there is the chance to find a beach all to yourself, which is exactly what our charter guests wanted last week. We found a beach in Formentera without a soul on it.

FY: You mentioned that the food was great in the Balearic Islands. What kind of cuisine is served up on AURELIA?

Guy: Food has always been a very important part of the AURELIA picture. The Owner is a real food enthusiast and years ago he set the precedent by instructing myself to seek out and hire a very good chef. He pays the salary of a chef that would normally be looking for a much bigger boat. The same could be said of all the crew on this particular boat. We have six crewmembers and they’ve all come from 50/60m vessels. They bring that big boat mentality to a slightly smaller boat. Many of our charter guests over the last five years have commented on that. Food-wise, the menu has always been very modern – a kind of Blumenthal-inspired culinary chemistry. It looks exceptional on the plate. We serve lots of fresh seafood. Charterers want to eat fish that was live that morning, lobster that was caught that morning and oysters that were fresh that day, which of course you can get here. There are fantastic seafood markets all over Spain. Often we take a guest with us. We take a guest up to the fish market and they love selecting their own fish.

FY: For the winter season, will AURELIA be transferring over the Caribbean?

Guy: No. We’re a single season boat. She stays in the Med. There are two reasons for this: the Owner never gets enough continuous time off to make it worth flying to the Caribbean for a holiday. And secondly, he doesn’t want the yacht used that much. He doesn’t want it to deteriorate in condition too much. He invests a lot of money every year into the interior and the exterior, making it virtually new again. We redo all the interior wooden floors, and marble bathrooms, – every year. All the fabrics on walls and ceilings- all the interior carbon, leather and steel – get renewed every year. There are new linens, new towels, and new mattresses. So that in April/May, when we start the season, the boat looks, smells and feels like a brand new yacht. The interior is not just cleaned it is renewed. And this is something that our charter guests appreciate.

FY: Are there any more features that we should know about?

Guy: AV, IT and communications. The Owner has spent a lot of time upgrading and investing heavily in future tech. The boat is kitted out with a lot of very customised features. In terms of entertainment systems, we have 4,500 watts of sound outside and about the same inside. We can play from any device that anyone wants to bring with them. We can upload it to a 16 terabyte hard drive. It offers the ability to interface with just about any source of music. We have 6 iPads on board, but they’ve been completely customised. We also have a commercial grade cellular network on board, so we can support any client’s home network from up to 20 miles offshore. The Owner is into satellite communications, it’s one of his core businesses, and so we have exceptionally good V-Sat connection. Without giving too much away, I’ve never been on a boat that has the capabilities that AURELIA has, in terms of entertainment and communication systems.

FY: So AURELIA offers all of the luxuries of a much larger yacht but in a more manageable charter option?

To organise your Mediterranean charter on M/Y AURELIA, or to enquire about other vessels in the Fraser Yachts charter fleet, contact Fraser Yachts.