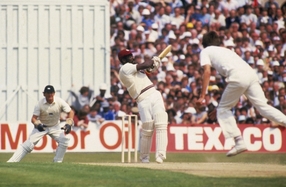 Along with white sandy beaches, crystal clear water and wonderful Creole cuisine, the West Indies are also associated with the game of cricket. And if you are lucky enough you might be able to catch a game of this quintessentially English sport whilst on an exotic Caribbean yacht charter.
The origins of cricket lie hundreds of miles and centuries away from luxury yacht charters in the Caribbean. No one knows when or where the earliest origins of cricket began but records can be traced back as far back as the 16th Century. There is however, evidence to suggest that the game was devised during Saxon or Norman times by children living in south-east England. There are a number of references to cricket being played in the Caribbean – one of the world’s favourite destinations for luxury yacht charter – as far back as the late 18th Century.  But the first club, called St Anne’s on the island of Barbados – was not founded until 1806. By the mid 19th Century the game was very much part of everyday life in Barbados, much as it is today as those on Caribbean yacht charter will discover. In 1865 the first inter-colonial game took place between Barbados and Demerara and in 1887 a cricket team from America visited the Caribbean.

As with many areas, the game of cricket in the Caribbean was initially limited to Europeans. Slavery was only abolished in 1833 and as late as the 1890s it was noted that there was “little opportunity for the coloured people to play”. But that slowly began to change and in 1900 a West Indies side toured England and included “black bowlers” who were paid professionals. The first test series took place between the West Indies and England in 1928, with the team from the Caribbean regularly beating the side from the country in which the sport originated. The West Indies cricket team – also known colloquially as the Windies – is a team made up of players from 15 mainly English speaking countries, including many of the most popular destinations visited on a Caribbean yacht charter. They include Antigua, Barbados, St Kitts, and St Nevis, St Lucia and the British Virgin Islands. In 2007 the West Indies hosted the World Cup there for the first time in what was seen as a huge coup for the Windies cricket team. The competition, which is watched by millions across the globe and induced cricket fans visiting the islands on a luxury yacht charter to watch a test or two. The competition was won that year by  Australia.
back to list
Share this page