On Location in Brazil 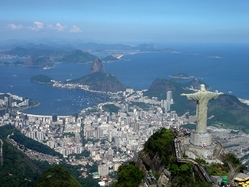 Forget St Tropez, Monaco and the glittering yet congested charms of the Cote d’Azur. There is only one Riviera on the tongues of the trendsetters this season, and that is the Brazilian Riviera. Praised by Wallpaper, lauded by Tatler and hailed by Vanity Fair as the coastal destination of choice, the Brazilian coastline is the place to seek out on luxury yacht charter this season. Following the increasing interest in the region, Fraser Yachts recently partnered with local charter provider and Azimut dealer, Yacht Brasil, to offer charter services along this hitherto relatively unexplored Atlantic coastline.
The Brazilian authorities are also in negotiations with Fraser Yachts to be the sole partner for providing superyachts for the 2014 football World Cup. Until now most vessels sailing in waters off Brazil have been less than 30 metres, but the booming economy has meant that more and more people are buying larger yachts, creating a demand for superyacht facilities along the coast. The region certainly has much to offer on a luxury yacht charter. The Atlantic shores which stretch north and south from the central hub of Rio and Sao Paulo have some of the most dramatic coastline in the Americas, dominated by high plateaus which cascade down to the sea.

Most of this stunning coastline is protected by the National Park island of Ihla Grande, famed for its mountainous jungle, historic ruins and beautiful beaches, creating ideally sheltered cruising waters. Meanwhile north of Rio lies the coastal state of Bahia, the epicentre of Brazilian beach culture and old colonial charm. Founded by the Portuguese in 1549, Salvador de Bahia is Brazil’s oldest and most historic town and was capital of the country for 200 years. The city has a magnificent setting on All Saints Bay, the second-largest bay in the world and is the spiritual home of the Brazilian martial arts Capoeira. It’s a place of tranquility and incredibly dramatic scenery, where jagged mountains back-dropped by lush mist-crowned jungle plunge into a sea strung with thousands of isles and islets and vast calm bays and endless sandy beaches. Yet at the same time it’s a hub of tremendous energy and activity, its booming economy encapsulated in this spirit of caipirinhas, capoeira, and, of course, Carnival. It is this enigmatic mix of culture, character and wild topography that bookmarks Brazil’s potential as a superyacht destination. And with direct flights from most European cities the region is also surprisingly accessible, even for a shorter cruise. For more information on chartering a yacht in Brazil please contact us.
Article edited from the Fraser Yachting Magazine
back to list
Share this page