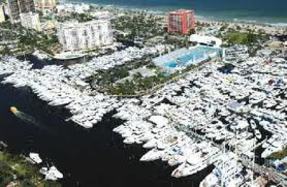 Reserve your tickets now in order to attend the majestic Monaco Yacht Show to find your dream luxury yacht for sale. As the super yacht industry continues to defy global economic caution and bounce back, the importance of leading boat shows has become increasingly apparent. There are now at least a dozen major yacht shows taking place at ports across the world all of which are vital for yacht brokers, charter companies, yacht designers, potential buyers and yachting enthusiasts to attend and network. And arguably the most prominent of all boat shows is the Monaco Yacht Show, which holds the accolade for being the event at which the largest deals for mega yachts for sale are signed.

The Monaco Yacht Show, where you will find the very best of luxury yachts for sale, is this year being held from September 21st to the 24th in the principality’s majestic Port Hercules. Launched in 1991 the Monaco Yacht Show at last year's count attracted more than 500 exhibitors from the yachting and luxury sector, with more than 100 mega yachts being presented. Not all of these mega yachts are for sale however, many are privately owned but available for luxury charter. Visitors to the grandiose show, which is held in the natural port of Monaco to the impressive back drop of the Principality’s Palace on the rock above, include a large number of high net worth individuals keen to find their perfect luxury yacht for sale.

The show also attracts many industry professionals, journalists and businessmen who come to Monaco to take part in the wide range of events staged during the four-day exhibition. This year organisers of the Monaco Yacht Show say there will be more than 40 ‘of the most beautiful motor and sailing yachts built in 2011 and whose average size is about 44 metre in length’. In 2010, a staggering 28 super yachts were sold, resulting in approximately €300 million of accumulated worth. More recently the superyacht market has seen eight yachts measuring more than 40 metres being sold in February 2011 adding to the general optimism regarding the state of the market at present.
back to list
Share this page