The Sights of Sicily on a Mediterranean Yacht Charter 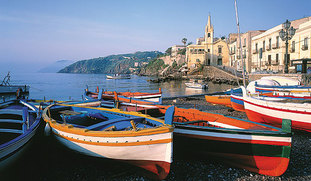 Sicily and the cluster smaller islands at the toe of mainland Italy are some of the most popular Mediterranean yacht charter destinations. And it’s doesn’t take much to see why. Sicily, which has more than 1,200km of stunning coastline, offers endless opportunities to sail between picturesque ports, stop off in secluded bays and dive some of Europe’s best sites.
It is also very popular amongst those interested in history. The island enjoys a unique culture due to its diverse heritage which has been heavily influenced by European, African and Asian culture. Only here will you find Arabian castles, Greek temples and Spanish churches sitting side by side. Below are some of the main sites which must not be missed on any Italy yacht charter of Sicily

Palermo
At the crossroads of several important Mediterranean trade routes. Subject of many skirmishes in its long history between the Phoenicians, Romans, Byzantines, Arabs, Normans and Spanish, Sicily’s regional capital is a fascinating historical site that every Italy yacht charter should incorporate. Highlights include the 12th-century mosaics in the church of La Martorana or Roger II’s private chapel, the Capella Palatina and the new Palazzo Riso contemporary art gallery

Syracuse
One of the great cities of the Western Greek intelligentsia, Syracuse is today undergoing something of a Renaissance and is another popular stop on a Mediterranean yacht charter. Visitors and second-home buyers are discovering the charms of Ortygia, the old town, surrounded by the sea on all sides and connected to the city’s modern centre by three short bridges. Highlights here include the Parco Archeologico, which houses a fifth-century BC theatre where Ancient Greek plays are still performed to this day in the summer. A memorable way to pass an evening on an Italy yacht charter.

Greek temples - Agrigento, Selinunte and Segesta
Don’t conclude your Mediterranean yacht charter without seeing at least one of the three great Greek temple complexes on the island. The most famous is Agrigento, which features the archaeological site known as the Valle dei Templi. Selinunte is situated on the south coast between Mazara del Vallo and Sciacca, whist Segesta is located near Palermo.

Taormina & Etna Taormina is arguably the most popular town on Sicily, and it’s easy to understand its popularity. Discovered by European travelers in the 18th century, it combines a breathtaking position on a distant spur of Etna with a wonderfully warm climate. A visit to Taormina on Italy yacht charter should coincide with a trip to the active volcano Etna. Although still active, trips can be made with a qualified guide to the lower parts of the volcano. You can also take a cable car close to the top from Rifugio Sapienza.
back to list
Share this page